This article was first published on my Facebook page.

You know when you’re growing up and important stuff is way off in the future? Well that’s what this is about. And a piano.

My parents have an old upright piano that has moved with them to many different cities and houses. One day when I was around 8 or 9, after listening to my sister Kathy or Barb’s Guess Who album, “Wheatfield Soul,” for the seventeen-thousandth time, I sat down at that upright and figured out how to play “These Eyes.” I must have had a knack for listening to the bass line of songs, so I just found the A to D low notes with my left hand, tickled a few ivories with my right until I found what turned out to be a Dm7 chord to create the iconic opening to the song. (That was also when I discovered the Major 7th chord, the most beautiful thing ever created.) 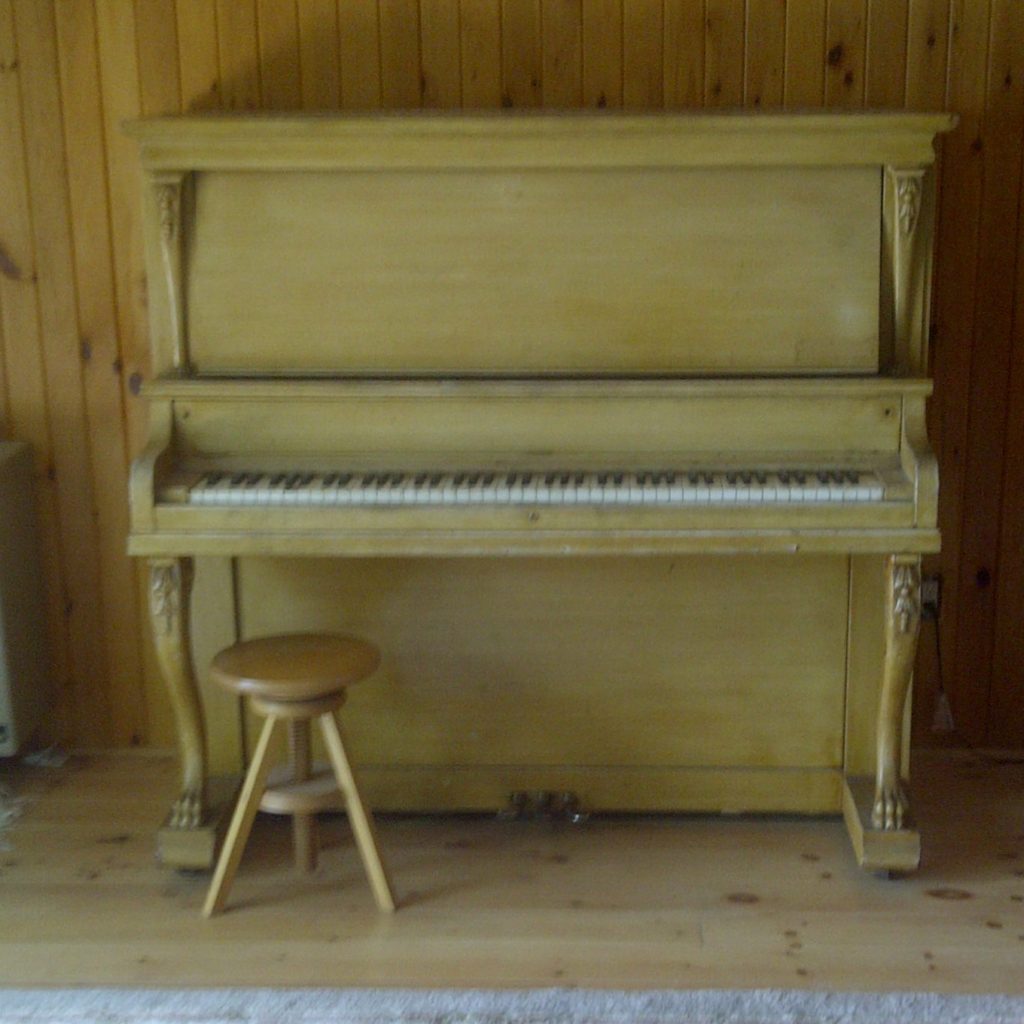 It was on that piano that I learned to play music by ear. The theory somehow came naturally to me. What didn’t come naturally was reading the music I was supposed to learn in Grade 3 Conservatory class. It was on that piano that I never practiced the Conservatory songs, much to the chagrin of my piano teacher, Gerald Death. Yes, that was his name (pronounced “Deeth,” if you’re asking.)

Then it was Elton John. Oh sure, I bought a few of his compilation music books, but honestly it was so I could see the guitar chords above the piano music, to validate I was playing in the right key. And I won’t deny there were a couple of Elton tunes with complex chords and seeing the notes written out did help. On that piano I would play everything Elton played. I even had a little tape recorder and would record myself singing and playing (when I discovered that I could disable the erase head of that little tape recorder and turn that thing into a multi-track recording device, I could even do harmonies with myself! But that’s another story.)

Then it was the Beatles…Martha My Dear, Rocky Raccoon, Lennon’s Imagine. All on that piano.

My best friend Laurie and I thought we were very clever, and in my parents’ basement, we would write skits, record fake radio commercials (“You know you’re soaking in it…”), and eventually we thought we could write a musical. Something about a magical dentist comes to mind… We wrote the songs for that musical on that piano.

I loved that my friends and I loved musicals. A bunch of us were into high school theatre in Orillia. My parents’ house for some reason became an after school drop in place, though I’m thinking now that it was mainly during snow days (of which there were many in Orillia.) It might have had something to do with Mum’s baking bread every week too! But in that basement on that piano, Hume and I would sing every Elton John song, every America song. And Liz would sometimes be there. And Steve, and Cindy. And eventually I discovered Steely Dan, so Rob Middlemiss and I would try to out-do each other trying to figure out some of those crazy Steely Dan chords before the other one would. On that piano.

Did I mention that piano moved a lot? Next stop, Ottawa. Me in a new city in the middle of high school. New kid in town. But somehow, I got connected to new friends by music. Jack Parker’s music class was full of cool people who were into…wait for it…Steely Dan, Elton John, and the Beatles. Of course I made fast friends. Six of them made up the legendary Ottawa band, The Quasi Detectives. Once in a while, they let me be the 7th Quasi. I offered up a couple of tunes that I wrote on that piano, tunes that had lyrics based on poems by Hume, the guy from the piano’s last chapter. On a summer day, Mike, J.P. And Rob came over to my house with drums, amps, and some recording equipment. We made the basement tapes. Two of my (and Hume’s) songs were recorded…”The System,” and “Jimmy Start the Car.” That piano is featured prominently on both tracks (if anyone is looking for a bootleg, I’ve got one…) 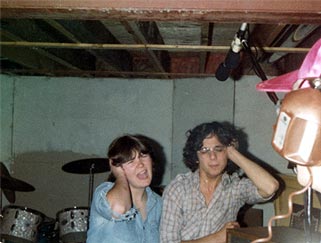 The stories since have been fewer, not so rich. The piano moved again. And again. I’d play it a bit when I came home for a visit. But I had an electric Roland keyboard that I spent more time with.

But it was always a given, that when the time came for my parents to move to smaller digs, the piano would be mine. It was just always so. And now the time had come.

Reality. Was I really going to move that piano down from Orillia to Toronto? I’m renting here, so no doubt there’s another move or two in my future. Do I really want to move it over and over? What about the cottage? Could it go there? Well it would be tough…could the floor hold it? Would the mice get at it? Would the harsh winters destroy it? Nope, it would be dumb to move it to the cottage. It was over.

A couple of weeks ago my sisters, brother, brother-in-law, and I were in Orillia helping to pack things up. It’s unbelievable the stuff we found in the basement, but that too is another story. I had decided not to take the piano, so I wanted to play it for one last time. It had been in the basement for 25 years, hadn’t been tuned for 25 years. The basement was often cold, often hot, often damp, often dry. And I played Let It Be. I played the piano ending of Layla. I may even have played some Elton John. It sounded great. That piano sounds like nothing else I’ve ever played. I know there’s a chip out of the ivory down at the second lowest A,  so my left pinky knows where to go from there. I know how softly to play the pedals, or when to not press them at all. I had to take this piano. 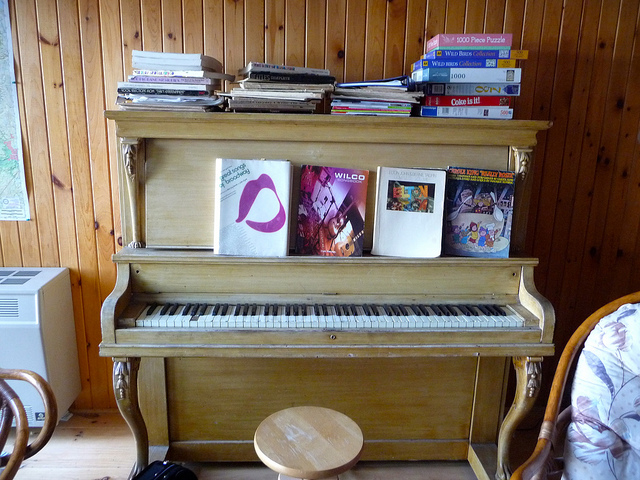 And now it’s at my cottage, with all those stories and songs baked in. If it lasts a year, I’m okay with that. If it lasts two, then I’m truly blessed. Time enough for some new stories for sure. 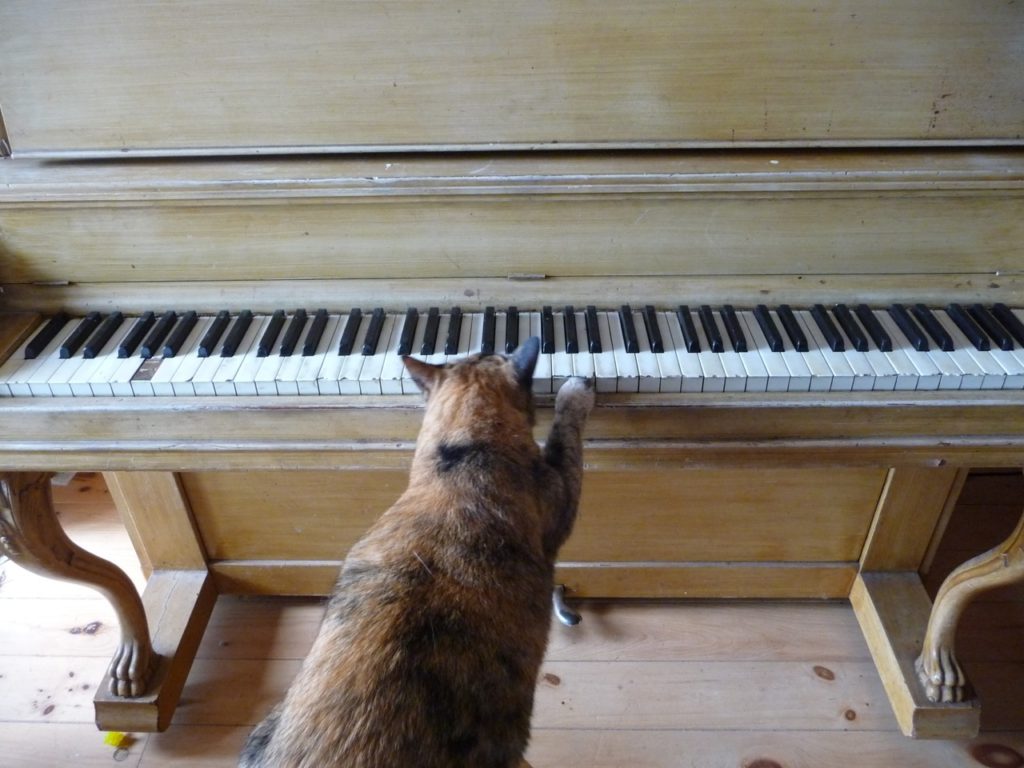 Post script: The piano is going great 4 years on. I’ve had a few jams here with the family and the Stewart Lake Band. Of course they all have to tune to me because the piano is just a titch flat…just a titch. After all these years! How lucky am I?!!! 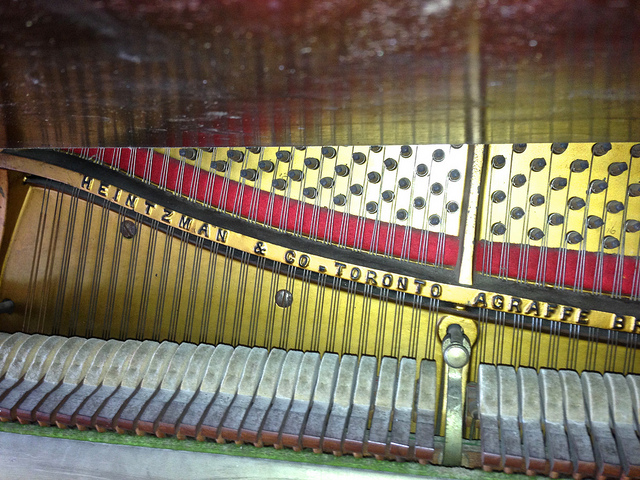 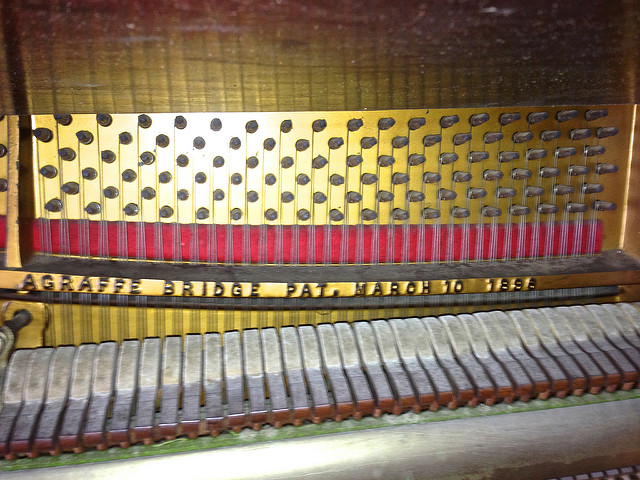